On wintery morning in December of 2011, I wandered through the narrow lanes of Kalipur Village, deep inside Bastar. Bastar, sadly, happens to be one of the most underdeveloped places in India. Deep inside the hinterlands of India, infested with political extremists of the extreme kinds, Bastar has not been able to keep pace with the growth of other parts of the country in Economic & Social growth indicators.  I could see signs of development in the village – Good roads, some pucca houses and some motorized public transport as well.

I could also see the imposing building of a Government Public School. As I worked through the main throughfare of the village, I suddenly thought I heard kids chanting alphabets in unison. I thought I was imagining things. As I followed the source of the sound, I found a newly constructed room where small children were being taught. They were a lively bunch. 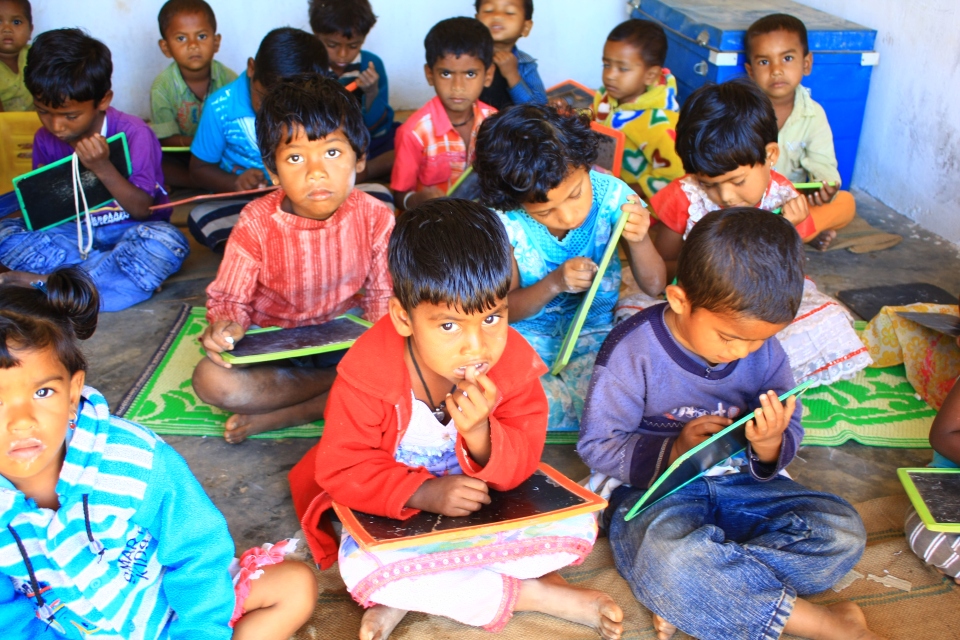 The sight of education being imparted in the morning on a regular basis to underprivileged children was indeed heartening. I am sure that improved educational standards in the remotest parts of the country will help our country to bring up the standard of incomes and quality of lives in our country and on overall basis.

On further enquires, I found that this school (and many others in the area) are run by ‘self help’ groups with some support from the Government. The teacher in this class, travels from the nearest town to the village and teach the children for few hours every day.

It was also great to see that there was no gender discrimination and both boys and girls were learning together.

As I walked away from the class, I felt really happy. I had seen seeds of real development and empowerment being reaped. These, I am sure, and many other similar instances, would improve the lives of people who are yet to benefit from the “India Growth Story”.

By the time this blog is published, I would be back to my day job, dreaming of the next vacation.

It was on a nippy post Christmas evening, we started our journey. The journey meant different things to each of the intrepid traveler.

First, the force or the motivation behind the trip, my wife. She was going back to her Alma Mater after a couple of decades. The last time she was there, it was the old millennium; apple and blackberry were fruits, very few people had actually seen a computer and the world used to move at a more languid pace. This time around, the millennium has changed. We have a New World Order. India is no longer a backward country. We aspire to be a superpower and are no longer ashamed to say that we are Indians. And to cap all that, there was a school reunion that was happening.

For my daughter, it was a trip to see a new place and see the school where Mom actually went (She was not yet sure Mom n Dad actually went to school or they were just pretending).

And in the midst of all that, I stood. Surveying my options. Well, I had a hobson’s choice. Either go along and get bored in the deep hinterlands of the country (deep into Naxalite territory) or stay back in Mumbai and risk the fury of my best half. Well, discretion is the better part of valour, as they say. And hence, I decided to trudge along, my gear bag in tow.

Well, we could not have asked for a more inauspicious start. The train started 7 hours late. And we were sitting the whole time in a railway waiting room not exactly fit for human habitation. Well, the journey was a smooth affair after that. Nothing untoward happened and we reached Raipur, the capital of Chattisgarh or a windswept wintery night. The morning after, we started our journey towards our main destination, Jagdalpur, about 300 km by road from Raipur, passing through some very hostile territory. We were joined by a old schoolmate of my wife and her two kids for the road journey. The journey took us through some very scenic locations in India, albeit perilous, interspaced by languid tea breaks and lazed out lunch breaks.

Well, we survived the journey and reach Jagdalpur late afternoon, before the sun set, giving my wife time to drag us through the quaint town, showing off the key landmarks, especially ones that had memories attached. We finally reached the Hospital campus, where she used to live. Sadly, the living quarters were no more. The quaint Bungalow has been replaced by a different structure and my wife stood rooted at the spot, searching for traces of her lost childhood. With a heavy heart, we moved out of the hospital campus and my wife started showing us around the city again, when we got a call from a friend to come over to his office for a ‘catch-up’ sessions. Well, we landed up there and as they say, ‘The rest is history’. It was once of the most boisterous but enjoyable sessions in the recent times.

Next day morning, we set off into the interiors of Bastar district, to see some of the landmarks of the location. Our first stop was Kanger Valley National Park. The valley has two key sites that attract visitors. Kutumsar Caves – a cave filled with wonderful stalactites and stalagmites. There are not many similar sites across the globe. After traversing a slightly difficult entrance, we were inside the caves. It was, surely a wonderful experience. The stalactites and the stalagmite features in the caves was like nothing that I had seen before. After the caves, it was time for the Tirathgarh Water Falls. The falls was bigger than anything I had seen in India and had its own charm. There were multiple layers of waterfalls as it climbed down the hill. We had the time and energy to see two layers of it. After that, it was time to get back to Jagdalpur and move in the opposite direction towards Chitrakot Water Falls. But before we hit the road again for the falls, it was time for a sumptuous lunch, hosted by our gracious hosts. Well, now that we (the tourists) were headed towards the falls, our hosts and the local team joined us and a large contingent (could have filled a big bus !!) moved towards Chitrakoot Water Falls in the fading light of the day. Well, thanks to some very adventurous driving by one of our hosts, Sameer, we managed to reach before he sun went down. Chitrakoot Falls are known as the Niagra of India due to its horse-shoe shape and we went in the lean season when there is very little water. We were told that, in monsoon, Indravati River feeds the Falls and it fills up the whole horse-shoe drop, unlike the trickling existence in the winter months. I am sure, in monsoon, it would have been a sight to behold.

Well, you make do with what you have. A few photo ops later, we headed back for an impromptu tea party. While our host for the evening Rashmi, did have a large house, we were a contingent large enough to almost overrun the house. And the hosts had no options but to grin and bear……

The next morning brought us to the day of action. A day filled with catch up sessions, visit to the school and then an evening get together. Well, that was for my best half. Our hosts were kind enough to guide me to a couple of local villages which provided me photo ops (the experiences of the village visits will be covered in a separate blog). All in all, a day really well spent, both for me and my wife. But the night, the grand finale was yet to come.

After a quick rest, with a prayer on our lips, we headed out towards the evening bash. Why the prayer? Well, the celebrations were in a private garden and it had started drizzling. Well, the rain gods decided to heed our prayers and the skies cleared. And that signaled for the festivities to begun. I would refrain from including details of the fun and frolic, but to say the least, everyone had a ball. From the kids who had a free run of half the lawn and were seen doing cartwheels and what not on the open lawns, the schoolkids( to rephrase it- erstwhile school kids) had a royal time of their own.

Well, all good things come to an end. It was time to retrace our steps backwards. For an onward journey to Raipur, and then to Mumbai. On our way back, I suddenly realised that I had not got bored in the entire trip!!!!! It was surely a moment of serendipity. But how come? Well, I then realised that our hosts (all Nirmalites in Jagdalpur) went out of their way to make me comfortable. From ensuring that I had company at any point in time to ensuring that I get to go to locations where I can shoot to my hearts content, they ensured that I was taken care of. And who was I to them – well an unseen spouse of an old friend. A person they knew nothing about. Well, that told me I have made friends (and hopefully, I am correct). And lastly, it would have not been such a wonderful trip if Pallavi , Addy and Sanjeevani did not put up with all my oddities and eccentricities.

Well, to sum it up,  it was really a journey of a lifetime for us as a family. My wife had her trip down the memory lane. I and my daughter had seen some of the most memorable sights of our lifetime. We have renewed some old ties and made some new friends. The last few days of 2011 were indeed a memorable journey for us.